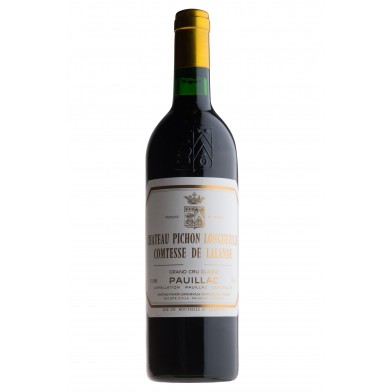 Ch. Pichon Longueville is one of the most important Super Seconds and is really hitting its stride under winemaker Nicolas Glumineau. The 2016 has a dark, concentrated colour with a delicate nose of cassis, dark fruits and blackcurrant. Well-structured and concentrated, there is a beautiful weight and ethereal texture to this wine, combining power, elegance, density and precision. It finishes long with a slight saline note and tremendous length.

Pichon Longueville Comtesse de Lalande is arguably the single hottest château on Bordeaux’s Left Bank right now. Quality has been steadily on the rise for some time, culminating in a trio of spectacular wines in 2014, 2015 and 2016. This remarkable retrospective, many months in the making, provided a fascinating opportunity to explore the château’s rich history.

“Tell me your birth year,” Pichon Lalande’s Technical Director Nicolas Glumineau wrote when he confirmed our appointment “and don’t tell me it is 1961,” he added dryly, no doubt in reference to what must be a very small stock of remaining bottles from one of the most historic vintages in Bordeaux of the last century. Imagine my surprise when I walked into Pichon Lalande’s gleaming new tasting room and saw not only the 1961, but pretty much every vintage of note going back to the 1920s. And, in case you are wondering, no, 1961 is not my birth year.

I tasted all of the wines in this article with Glumineau and Charles Fournier, who serves as Pichon Lalande’s Head of Sales and Marketing. Glumineau organized the wines into two groupings. We started with younger wines from 2005 through 2016, tasted in ascending order, that provided a fascinating opportunity to track the evolution of Pichon Lalande, first under the Rouzaud family’s stewardship, and then in the years since Glumineau arrived from Montrose. The second flight started with the 1989 and moved back through series of older vintages culminating with the 1921. I can only describe tasting these vintages as one of the most totally hedonistic experiences of my life. 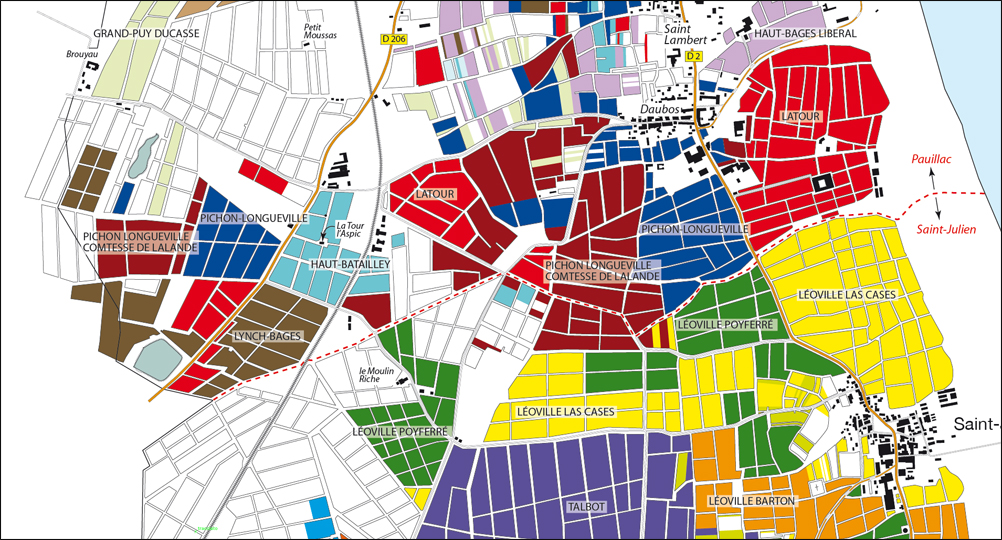 A view of Pichon Lalande and neighboring châteaux in Pauillac and Saint-Julien. © 2017, Alessandro Masnaghetti. Used by permission.

Pichon Longueville Comtesse de Lalande, often referred to informally as Pichon Lalande or Pichon Comtesse, is listed as a second growth in the Bordeaux classification of 1855. The estate lies on the border shared by Pauillac and Saint-Julien, which is represented by the red dotted line on the map above. Pichon Lalande’s ninety hectares of vineyards are cradled between those of Latour, Pichon Longueville (also known as Pichon Baron) and Haut-Batailley in Pauillac, and Léoville Poyferré and Léoville Las Cases in Saint-Julien. The nucleus of parcels is adjacent to Pichon Longueville, while the château, offices and tasting room are on the opposite side of the road, next to Latour. Readers will note that some of Pichon Lalande’s vineyards are actually in Saint-Julien. The château is granted an exemption for those parcels that allows them to be used for Pauillac wines. 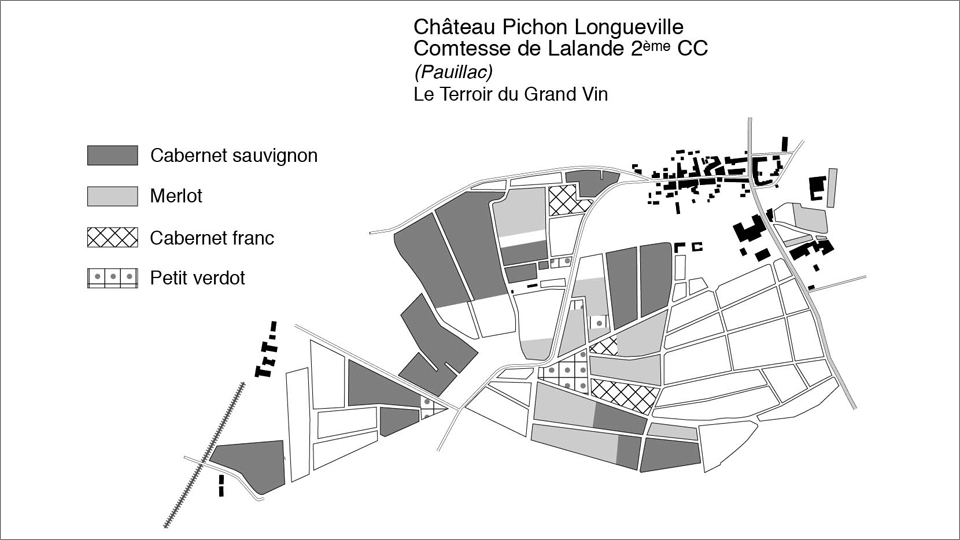 Historical records show that Bordeaux merchant Pierre Desmezures de Rauzan acquired land in Pauillac in the late 17th century. De Rauzan was a highly influential figure in his time, as he also managed Château Latour and Château Margaux. In 1694, de Rauzan’s daughter, Thérèse, married Baron Jacques Pichon de Longueville. Part of the dowry included a large property in Pauillac that became the Pichon estate. Baron Joseph de Longueville later inherited the property and managed it until he passed away in 1850, aged 90. The estate was then divided between Baron Joseph’s two children. Virginie, who in 1818 had married Charles Henri the Comte of Lalande, received the land that is today Pichon Longueville Comtesse de Lalande, while Raoul inherited the portion that is the present-day Pichon Longueville Baron. Brothers Edouard Miailhe and Louis Miailhe purchased Pichon Lalande in 1925. They would later go on to invest in a number of properties, including Château Palmer. Edouard Miailhe’s daughter, May Eliane de Lencquesaing, took over the management of the château in 1978 and became one of the great ambassadors in the world for Bordeaux and its wines during a brilliant career that spanned four decades.

Frédéric Rouzaud, the patriarch of the Champagne Roederer group, purchased Pichon Lalande in 2007. A totally new cellar outfitted with modern equipment was in place for the 2013 harvest. Further investments continue throughout the property. One of the many things Rouzaud has succeeded in doing is building a company that, despite its size, still retains the feel of a family-run business rather than that of a conglomerate.

Technical Director Nicolas Glumineau arrived from Montrose in 2012. Over the years, I have observed that many of the world’s greatest wines are made by people whose life experiences include time spent in other fields. Originally trained as a lyric baritone, Glumineau made a switch to engineering in 2004 out of a desire to have more stable family life, something that is virtually impossible for a professional touring musician. Stints at Haut-Brion in 2005 and Margaux in 2006 followed, before Glumineau landed at Montrose, where he worked from 2007 through 2012. Glumineau’s first vintage at Pichon Lalande from start to finish was 2013. Talk about trial by fire.

Among recent developments at Pichon Lalande has been a much more flexible approach to picking. Up until around 2010, the harvest took place within a fairly compressed span of 10 to 14 days. Today, the harvest might still involve 10 to 14 days of picking, but that time is now spread out over 4 to 5 weeks. Of course, this very flexible approach to harvesting and seeking optimal ripeness parcel by parcel is only made possible because of the arrival of smaller fermentation tanks, one of the single biggest changes in the way Bordeaux wines are made today as opposed to a generation ago.

Wow! The 2016 Pichon Lalande is one of the must-have wines of the year. I felt that way every time I saw it during the spring en primeur tastings. A few more months in bottle has only made that potential even more obvious. At once powerful and yet also delicate, the 2016 is a regal, aristocratic wine endowed with class and pedigree to burn. The crème de cassis, violet, graphite and menthol flavors are finely sketched, sure, but what stands out most is the wine’s extraordinary balance. While the 2015 is a soloist, the 2016 is an orchestra.