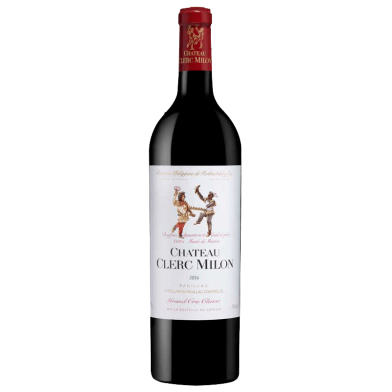 The 2016 Clerc Milon is a blend of 55% Cabernet Sauvignon, 29% Merlot, 13% Cabernet Franc, 2% Petit Verdot and 1% Carmenere (the latter vinification intégrale, so that it includes 50% of the stems). It has a very pure bouquet, a mixture of red and black fruit, a touch of cedar and ash in the background. It takes time to really unfold in the glass. The palate is adorable. svelte tannin, beautifully pitched acidity, great depth with a silky smooth finish that just caresses the mouth.

A legendary terroir, prestigious neighbours, a providential encounter: the history and the success of Château Clerc Milon are summed up in these three words. The terroir is that of Pauillac, where some of the world’s finest wines are made. The neighbours are Mouton and Lafite, illustrious First Growths whose nearby vines can be seen from the terrace of the château. The encounter was with Baron Philippe de Rothschild, who in 1970 acquired the then badly neglected estate and decided to restore it to its status as a Classified Growth.

In 1988, on Baron Philippe’s death, consolidation of the vineyard was well underway and Clerc Milon had regained its reputation among wine-lovers. However, the technical facilities were limited to a rudimentary vat house, the cellars were located some distance away in the town of Pauillac and the “château” was just a small village house. So it was only right that Baroness Philippine, continuing her father’s work, should include the modernisation of the estate in her ambitious plans for the development of the family company.

A new Clerc Milon thus arose in two stages, with the construction of an entirely gravity-fed vat room in 2007 and then, in 2011, a set of buildings with a surface area of nearly 3,600 square metres, comprising a half-underground barrel hall, a cellar and reception and tasting rooms. The two designers, the scenographer Richard Peduzzi and the architect Bernard Mazières, came up with a rectangular design in the form of a temple, encircled by a vast terrace giving onto the vines. The materials used – stone, glass and wood – echo the world of wine. The necessary energy is provided by 300 square metres of photovoltaic cells, while the same concern for the environment prevails in the vat room.

The new vat room was designed to suit the patchwork of parcels and to be as flexible as possible when the harvest is brought in. As at Mouton, the grapes are entirely hand-picked in 12-kilo open baskets. The decision when to pick depends entirely on the ripeness of the grapes, verified by successive tastings. That allows for extremely precise zoning and may entail up to three passes in a single parcel. After hand-sorting, the grapes are transferred to the vats in mobile bins. In the 40-vat winery, gravity feeding reduces the need for handling and pumping: this makes it easier to keep the grapes intact, thus retaining all their aroma and flavour.

Château Clerc Milon wines are aged for 16 to 18 months in oak barrels, 40% of them new. Humidity in the barrel hall is maintained at around 80% by ultrasound humidifiers and the temperature is maintained between 14 and 16°C. Racking is practised once, twice or three times during the maturing period: the clear wine is run off into another barrel to separate it from the lees that have collected at the bottom. The empty barrel is then cleaned and refilled. Traditional fining with egg-white is carried out at the end of the maturing process in order to refine the wine’s tannic structure and complete the clarification process before bottling.

Respect for tradition, a feeling for aesthetic and technical innovation: true to these family values, Baroness Philippine de Rothschild has fully restored the legitimacy of Classified Growth status to a château that her father had already put back on the right track. Clerc Milon now has not only high-level technical facilities but also spectacular reception areas. Above all, it benefits from the expertise and commitment of all those who, having attended its rebirth, are now working to secure its reputation as a gem of Médoc winemaking and architecture. It is to those men and women that the task of writing the next page in its history will fall.

Château Clerc Milon now has 41 hectares (101 acres) of vines in the north-east of the Pauillac appellation, on the lovely Mousset crest overlooking the Gironde. The slight slope favours both natural drainage and exposure to sunlight, while the nearby river creates a microclimate that protects the vines from frost in spring, reduces the risk of hail and lowers the temperature in summer. The soil is made up of two-thirds deep sandy gravel over a clay-limestone base which outcrops in the eastern part of the estate.

The vineyard is planted with five grape varieties typical of the region: Cabernet Sauvignon (50%), Merlot (37%), Cabernet Franc (10%), Petit Verdot (2%) and Carmenere (1%). The average age of the vines is 53 years, probably one of the highest in the Médoc. Mostly planted before the development of clonal selection, they represent an exceptionally rich genetic resource. The vine density is high, ranging between 8,500 and 10,000 vines per hectare depending on the parcel.

Environmentally-friendly, integrated vinegrowing techniques are employed, keeping the use of pesticides to a minimum. In the vineyard itself, the close monitoring and strict parcel selection are on a par with those practised at Mouton Rothschild.

A wine with considerable ageing potential, a particularly successful association of gravel and clay-limestone terroirs, of Cabernet Sauvignon and Merlot, powerful, tannic, fruity and harmoniously full-bodied, Château Clerc Milon displays all of the typical elegance of the finest Pauillac wines.