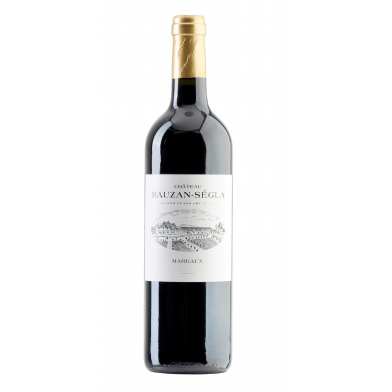 This leaps from the glass with expressive notes of blackcurrant, cherry, a little incense and pepper, violets and mint. The body is precise and concentrated, with a pleasing vitality giving way to a taut finesse. The overall sensation is one of sensual pleasure, finishing with a deft touch which is fast becoming the hallmark of winemaker Nicholas Audebert.

Château Rauzan-Ségla and Mouton Rothschild were considered the leading 2emé Cru Classé Bordeaux properties during the 19th century. However, while the fortunes of Mouton prospered in the 20th century, culminating in its elevation to 1er Cru status in 1973, Rauzan-Ségla`s reputation dwindled and a succession of disappointing wines were produced.

In the early 80s the Rauzan-Segla was sold and the renaissance began. The eminent Professor Peynaud was appointed as a consultant and the proportion of Cabernet Sauvignon in the blend was increased, as was the proportion of new oak used in the maturation process. In 1986, a brand-new cuverie was built.

A succession of eye-catching wines were produced at Rauzan-Ségla in the mid to late 80s and early 1990s. Rauzan-Segla was bought by Chanel in 1994.

There are now 45 hectares of vineyards at Rauzan-Ségla and the grapes (63% Cabernet Sauvignon, 35% Merlot, 2% Cabernet Franc) are fermented in temperature-controlled, stainless steel tanks. The wine is then matured in barriques (60% new) for 18 months.