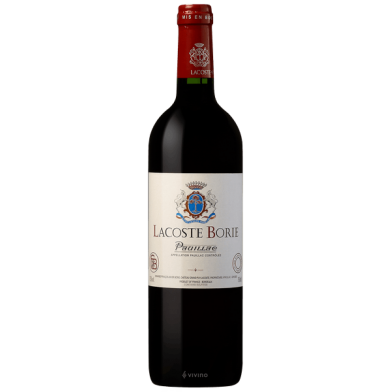 The 2016 Lacoste-Borie is a blend of 61% Cabernet Sauvignon, 29% Merlot and 10% Cabernet Franc, cropped at 50 hectoliters per hectare. It has a clean and precise bouquet, not as complex as some of its peers, yet with thoroughly enjoyable raspberry and blackcurrant leaf tinged with cedar. The palate is medium-bodied with grippy, slightly dry tannin on the entry, hints of dark chocolate interlacing the black fruit with a touch of cracked black pepper on the finish.

One of the oldest estates in the Médoc

The history of Grand-Puy-Lacoste is fascinating in many ways. It is a family saga going back to the 16th century.

The name Grand-Puy, already mentioned in documents from the Middle Ages, comes from the ancient term "puy” which means "hillock, small height”. True to its name, the vineyard sits on outcrops with a terroir similar to that of the Médoc's first growths. From Since the 16th century the property remained attached to a single family from generation to generation, in a direct line through marriage until 1920, before connecting with another family in 1978—the Borie.