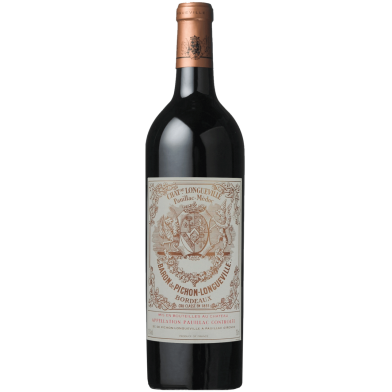 The 2016 sits in the glass with a dark hue. The nose displays black fruit and cassis. It is very concentrated on the palate, with solid viscosity and weight – almost like a crashing wave of dark fruit swirling around one’s mouth. There is a lot to unfurl here. The acidity keeps everything in balance and it finishes with a mouth-coating texture and notes of blackcurrant, mocha and coffee.

Château Pichon-Longueville Baron, a leading Pauillac 2éme Cru Classé estate, is one of Bordeaux's most illustrious "super seconds". In 1987 it was bought by the AXA Millésimes Group, who also own Cantenac-Brown, Petit-Village, Suduiraut.

AXA built a state of the art cuverie and chai at Pichon-Longueville Baron, while, in 2000, Christian Seely took over from Jean-Michel Cazesas as general manager. Pichon-Longueville-Baron's 73-hectare vineyard (70% Cabernet Sauvignon, 25% Merlot, and 5% Cabernet Franc, runs adjacent to that of Château Latour and lies on deep gravel beds.