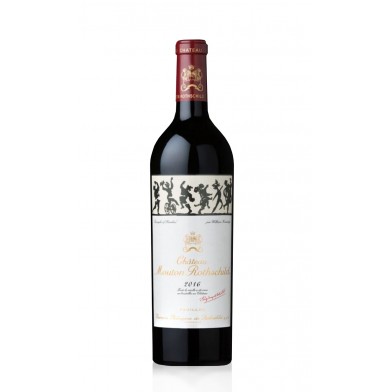 Dark, cherry red, the nose comprises blackcurrant and bilberry, with an undertone of floral notes. With time, a little pepper and spice shines through and there is a big, rich cassis note on the mid-palate. The palate is a mélange of black fruit and cocoa. Full-bodied, the wine is long with a persistent and fresh finish.

A first growth in the 1855 Classification, Château Mouton Rothschild has a long and storied history; wine has been made here since Roman times.

The estate has been in the Rothschild family since 1853, but it wasn’t until the arrival of Baron Philippe de Rothschild in 1922 that its fortunes were transformed. Baron Philippe was a dynamic figure and revolutionised the estate. He was the first to introduce château-bottling, as early as 1924.

His daughter Baroness Philippine continued to help raise Ch. Mouton Rothschild to new heights with numerous endeavours, including the inauguration of a new vat house in 2013.

Following the retirement in 2020 of Philippe Dhalluin, the winemaking team is now headed up by Jean-Emmanuel Danjoy. Danjoy, who was already in place as Director at Ch. Clerc Milon, brings with him considerable experience. He had also worked alongside Dhalluin for over a decade.

In style, the wines have immense appeal, with exotic, powerful aromas of cassis, minerals, tobacco leaf and graphite, backed by an opulence on the palate and impressive length on the finish. “Flamboyant” is a word sometimes used in tasting notes, and in comparative blind tastings this attribute is frequently what sets Mouton apart.