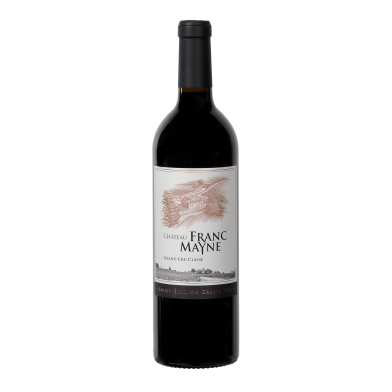 The 2015 Franc-Mayne has a refined and detailed bouquet with blackberry, raspberry coulis and a touch of cedar emerging from the glass. This is a classy bouquet in the making. The palate is fresh and vibrant with succulent red berry fruit overlaying a fine lattice of tannin. Precise, focused and elegant without compromising the fruit,

While most of the story for Chateau Franc Mayne begins in the 1700s, there are ruins on the estate that date back to the ancient Romans who were the first people to cultivate vines on the property. Over the years, Chateau Franc Mayne has had more than its share of owners.

One of the first decisions made by the new owners was to change to make up of the vineyard and thus, the blend of the wine. Previous vintages were often 100% Merlot. Starting with the 2004 vintage, the blend began to include 10%, Cabernet Franc.

Chateau Franc Mayne, which is one of the 17 different, Bordeaux producers with the word, Franc in the title, was owned and managed by a fashionable couple, Griet Laviale and Herve Laviale until January 2018, when they sold the estate to Jean-Pierre Savare.

Jean Pierre Savare was already quite familiar with Franc Mayne as was a minority investor in the vineyard, along with the Cazeneuve family, the owners of Chateau Paloumey in the Haut Medoc appellation.

Under the control of Griet Laviale and Herve Laviale, Chateau Franc Mayne was completely renovated, from top to bottom. The very modern, energy-efficient, sleek cellars were created by the noted architects Lanoire and Courrian.