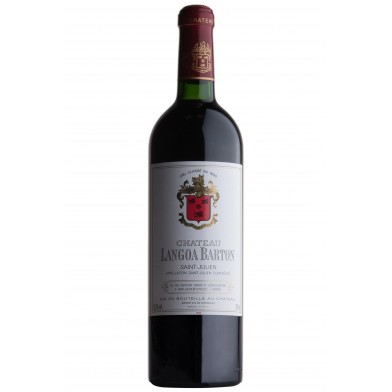 The 2016 Langoa Barton is medium to deep garnet-purple colored and opens with cedar, red and black currants, kirsch and menthol with smoked meats. The palate is medium to full-bodied, firm, grainy and packed with youthful, energetic fruit, finishing long and perfumed.

Hugh Barton was a descendant of an Irish family which settled in Bordeaux in the 18th century and which has a long and distinguished history in the region’s wine trade. Both properties are still family-owned and run and together represent the longest tradition of unchanged ownership in the Médoc. Anthony Barton is the current proprietor but is gradually passing the reins to his daughter Lillian. Langoa Barton has 20 hectares of vineyards (Cabernet Sauvignon 71%, Merlot 21%, Cabernet Franc 8%) lie on gravelly-clay soils. Vinification includes 18 months' maturation in oak barriques (50% new). Langoa Barton is vinified and matured in exactly the same way as Léoville-Barton and any difference between them must be put down to variations in the soils and exposure of their respective vineyard blocks.

Both Langoa and Léoville wines are models of typical St Julien restraint and elegance, and Anthony’s fair pricing policy, always with an eye to the long term , has won him many loyal friends amongst his customers. For years, Langoa Barton was considered slightly lighter and more forward than Léoville. However, in the last decade it has become noticeably deeper in colour and richer and more concentrated on the palate. Langoa Barton is now often the equal of Léoville.