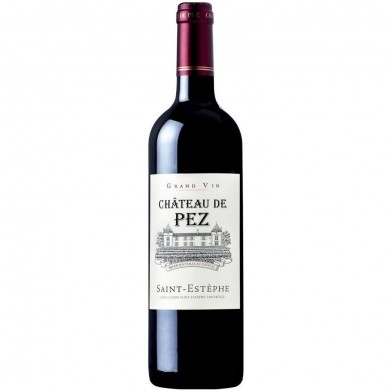 The bouquet of this wine expresses notes of blackcurrant, cherry and liquorice as well as a hint of minerals. Rich and complex, this wine maintains the balance between density and harmony, power and refinement, race and the precision of its tannins.

Founded in the 15th century, Pez is the oldest domaine in Saint-Estèphe. The Pontac family, then-owners of Château Haut-Brion, gave Pez its vineyards. The property remained in the hands of descendants until the French Revolution. Sold as a property of the state, the domaine belonged to a succession of families until 1995, when it was purchased by Champagne Louis Roedererer.

Château de Pez is one of the oldest properties in Bordeaux’s Left Bank and consists of 74 continuous acres with 64 acres planted to prime grape varieties, mainly merlot and cabernet sauvignon. Thanks to the quality of its production, Château de Pez is counted among the most highly reputed crus of the Médoc and was reclassified as a Cru Bourgeois Exceptionnel in 2003.