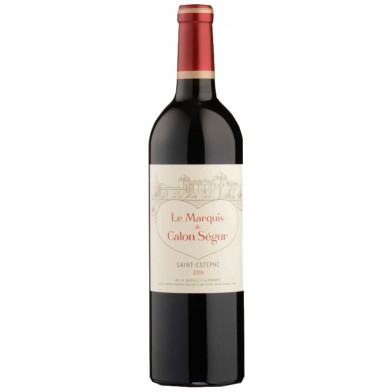 Glorious dark berry fruit is supported by the same crunchy saline freshness that elevates the Grand Vin to such elegant heights. Real midnight dark spice comes rolling through with poise and precision. Marvellous dark intensity aligned to a keen freshness. This displays serious pedigree for a second wine. Damson and plum mingle with leather and smoking / tobacco spice.

If there was one standout surprise wine of the vintage for us it was without doubt Château Calon-Ségur. Such are the efforts of the estate that we believe their second wine, Le Marquis de Calon, is amongst the very best made this vintage. When one considers its price at just £25 a bottle on the table, it is a staggering bargain!

It is such an oddity that a classification of a wine region carried out well over 150 years ago somehow generally seems to still ring true today. However, there are of course exceptions. There are times when a Château truly excels itself, producing something miraculous, forcing one to recalibrate not just your notions of this producer but also the potential of the wines of the vintage and the region. This marks such a shift that we were eager to try the wines again after our first mesmerising experience. They are so utterly complete. From striking perfumed aromatics to textural finesse, the way the fruit is so elegant yet complex and all culminating in a thrilling finish.

For this St-Estèphe Château 2016 really proved to be a standout pioneering vintage. As Neal Martin points out this is ‘a property that is being reborn’, and being an appellation which ‘shines in 2016’, this marks a real shift for the property. Jane Anson, of Decanter, confidently declares that Le Marquis de Calon ‘is a beautifully mouthwatering second wine’ and we could not agree more. A real star of the second wines we tasted this is very much a must have. With miniscule quantities released from the Château the Grand Vin is being allocated to those who have bought previously and the stunning second wine is also only available in small quantities. We urge you to declare your interest as soon as possible.