All new products
> Wine>France>Bordeaux>Trio of Mature Clarets from the Superlative 2005 Vintage
Special Offer! 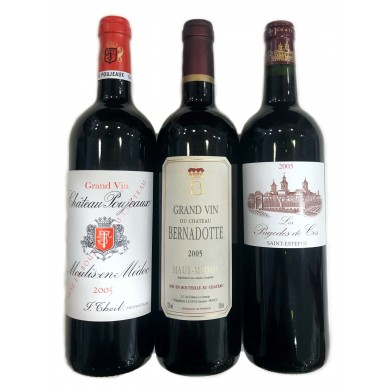 Trio of Mature Clarets from the Superlative 2005 Vintage

TRIO OF MATURE CLARETS FROM THE SUPERLATIVE 2005 VINTAGE

The 2005 is anassemblage of 49% Cabernet Sauvignon, 48% Merlot and 3% Cabernet Franc. 15% is aged in new oak for a period of twelve months. The aromas reveal currant, fragrant red fruit and duskier blackberry.  Ample on the palate, gently mouthfilling, there is an attractive supple
accent here with pleasing cool ripeness and fleshy, stone-fruit succulence. Well-balanced, and well-made, this is a reliable haut-médoc, with more than a hint of class. It will prove very appealing in its youth.

Château Bernadotte is a French wine producer located in the Haut-Médoc. It was known as Château Fournas until 1997 when it was purchased by May Eliane de Lencquesaing, then-owner of the esteemed Château Pichon Longueville Comtesse de Lalande in Pauillac. Since 2012, it has been owned by the King Power group. Château Bernadotte produces a Cabernet Sauvignon-dominant Bordeaux blend and a second wine under the label Fournas Bernadotte.

The 35-hectare (86-acre) estate is made up of soils with gravel, sand, and some clay. The vineyards are planted to around 50 percent Cabernet Sauvignon, 44 percent Merlot, four percent Cabernet Franc and two percent Petit Verdot. The vines are on average 25 years old.

Château Poujeaux is an estate located in the Moulis-en-Médoc sub-appellation within Haut-Médoc, on the left bank of the Gironde in Bordeaux. The château began producing wine in the 19th Century and, in 1921, was purchased by the Theil family. Being located in Haut-Medoc, Château Poujeaux favors Cabernet Sauvignon in the production of its three wines.

The grand vin is predominantly made from Cabernet Sauvignon, blended with Merlot and smaller amounts of Petit Verdot and Cabernet Franc. It has an estimated production of 300,000 bottles a year. Poujeaux has a second label called La Salle de Château Poujeaux, a red blend that varies by vintage and produces roughly 80,000 bottles annually. Finally, Poujeaux releases another red under the slightly broader Haut-Médoc designation called Haut de Poujeaux with 20,000 bottles produced annually.

Big blackcurranty nose with a touch of raspberry brightness and cedar. Slightly dry on the palate, but perhaps will come round as there is a nice elegance and violetty blackness to the fruit. Tom Cannavan

This is classic Cos from a great vintage, with all the power and finesse you would expect, combined with the delicate oriental spice that is so much a feature of this chateau’s greatest wines. A half-and-half blend of Cabernet Sauvignon and Merlot, with 5% of press wine added, the wine has a full nose of minerals, pepper and spice, with lots of ripe cassis behind. The palate is dominated by clean, pure fruit flavours, edged with hints of peppery undergrowth. The tannins are very ripe, rounded and accessible, the finish impeccably smooth and polished. As you will see below, this wine is understudy to one of the leading players of the vintage.

Cos d'Estournel is a vineyard and winery in the Saint-Estèphe appellation of the Médoc. In the 1855 Classification , it was classified as a second growth and remains one of the most prominent and sought-after of all Bordeaux wines. Historically, the Cabernet Sauvignon-dominant grand vin has had a high percentage of Merlot compared with other Médoc growths, although this has lessened in recent years. Cos d'Estournel is dark, brooding and tannic when young, developing complexity and intensity with time.

The estate is situated in the very south of Saint-Estèphe, just north of Pauillac's Lafite Rothschild. The south-facing vineyard slopes gently down to the Jalle du Breuil stream which separates it from Lafite. In old Gascon, "cos" means "hill of pebbles", and the vineyard does consist of deep Quaternary gravels and clay on limestone bedrock. It covers 91 hectares (225 acres) and is planted 60 percent to Cabernet Sauvignon and the rest Merlot.

Besides the top wine, Cos d'Estournel has three other red wines in its portfolio. The second wine, Les Pagodes de Cos, was initiated in 1994 and is made from younger vines in vineyard areas designated for the grand vin. Château Marbuzet was historically sourced from younger vines but, since 1994, has been made from the 7 ha (17 acres) of vines surrounding the cellar.

The last wine, Goulée, was first made in 2003 and comes from a vineyard at Port de Goulée in the Northern Médoc. Since 2005, two white wines, Cos d'Estournel Blanc and Goulée Blanc, have also been added to the portfolio.

The new winery, which was built in 2012, has four vats which can be lifted to allow processes to be gravity-fed. The grand vin is matured for 18 months in new oak barrels; Les Pagodes sees 12 months in new oak whilst Marbuzet and Goulée rouge are matured in 50 percent new wood. Annual production of the various wines varies between 200,000 and 380,000 bottles.