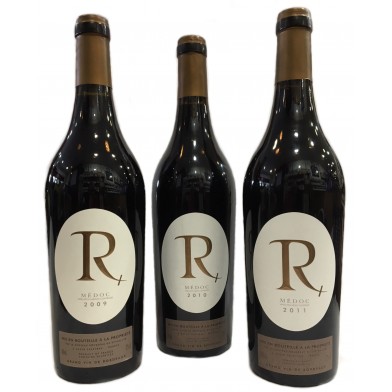 Recieve TWO bottles from each of the three vintages for an extraordinary price of £99.95 (for the six bottles)

2009 was being called the vintage of the century (until 2010, 2015 and 2016 came along!). With a perfect sunny, long, warm growing season, and cool nights, the wines produced were at once amazingly ripe and balanced with exquisite acidity and showing immense power and structure. “Rx 2009” is polished and ready to enjoy, with sweet fruit and all of the structure necessary to last many years in the cellar. This was an auspicious year to launch the “Rx” wines and a year in which the Petit Verdot grapes ripened beautifully for the first time since planting, albeit they were picked from the vines in late October when the vine leaves had already fallen to the ground!

2011 was a complicated vintage where summer weather appeared in spring (April was one of the hottest months) and spring weather appeared in summer (it was the coldest July in over thirty years). Uneven ripening meant dependence on sorting at an early harvest where yields were at a record low and berries were small, meaning big tannins. This last vintage of the “Rx” trilogy was a veritable success due to stringent selection but this was at the expense of quantity – less than half of what was produced in either of the other two years. The wine is fresh and bright with more red fruit than black and filigree tannins that knit beautifully to provide this wine with longevity.