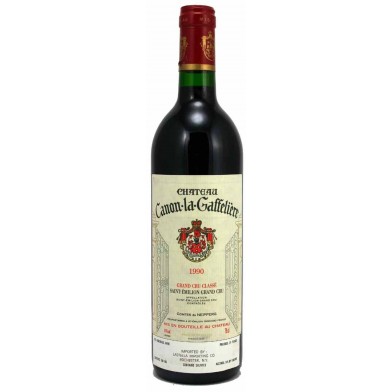 Exquisite bouquet with spicy, floral overtones, as well as power and aromatic complexity. Remarkably well-structured, always elegant, and unfailingly long on the palate.

Château Canon La Gaffelière is located on the outskirts of the medieval town of Saint-Emilion, at the southern foot of the slope.

The unusual proportion of grape varieties (55% Merlot, 40% Cabernet Franc, and 5% Cabernet Sauvignon) at Canon-La-Gaffelière is perfectly suited to the soil.

The average amount of Merlot is approximately 70% in Saint-Emilion. This variety contributes roundness and opulence. However, the high percentage of Cabernet Franc at Canon-La-Gaffelière is unquestionably well-adapted to the estate's warm soil. This variety accounts for an exquisite bouquet with spicy, floral overtones, as well as power and aromatic complexity. The old Cabernet Franc vines do especially well on soil with a high clay content. Seeing as the Cabernets are usually late-ripening, they take full advantage of the estate's warm soil. This means they mature much earlier than in most other parts of the appellation.

The vines, an average of 45 years old, are deeply rooted in the soil and absorb all the goodness in the terroir. They are mostly replaced individually rather than plot by plot (which maintains the average age). The last major replanting dates back to 1986. Mass selection is practised. This is especially useful in order to perpetuate the precious old Cabernet Franc vines. It not only maintains the vineyard's genetic heritage, but also its unique balance.