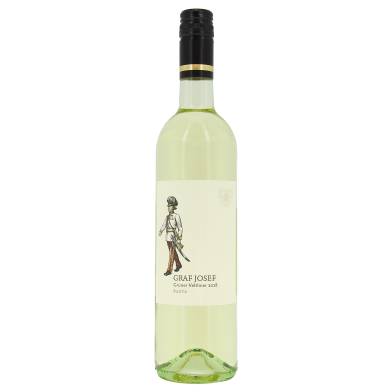 A gorgeous Gruner Veltliner that is a great example of how approachable this grape can be. Citrus and apple flavours with lovely, subtle herbal notes.

Bright crisp and fruity with aromas of green apples and herbs.

Graf Joseph is named after Johann Josef Wenzel Anton Franz Karl Radetzky, who was a Count or Graf, and known as Josef, from what is now the Czech Republic. He was the most celebrated military figure of the Hapsburg empire in Austria and was so popular that music was written for and about him. Immortalised by the Johann Strass I march with his name, two brothers born in Dublin and based in Ireland and Vienna decided to honour him in wine. By collaborating with a Krems-based winery they have made a brilliant wine that is peachy, zesty, and dry with notes of grapefruit. This is a really understandable wine that is a fine homage to one of the Austria's most famous and popular military exports.